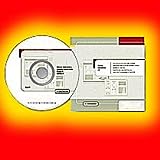 Product Description
Our C++ programming DVD tutorials cover beginning and advanced topics on how to program using the C++ language in an easy to view and understandable tutorial video format. This product is exceptionally well organized using the latest Tutor Engine v4. 0 to categorize and organize video lessons. You’ll be able to click and view videos instantly. Jump to any section of the video and repeat lessons you haven’t quite grasped the first time through. There are hours and hours of training on DVD rom including extensive section on programming functions, branching statements, pointers, C++ standard library, header files, Classes, virtual functions, polymorphism, inheritence, friend functions, operator overloading, standard template library, namespaces . . . etc. . . There’s just too much to list them all ! This DVD can take a beginner to advanced programming level much quicker than any book. . . . More >>


C++ Tutorial continued (Part 5), going through pointers a little more in depth as people didnt really seem to get it.

A helpful way to learn c++, and to understand how to program physics in programming. Part 1 of this tutorials goes over the setup of the vector class, and we make a function for converting polar coords, to cartesian.

Google Tech Talks March, 5 2008 ABSTRACT Both by accident and by design, C++ supports a number of different styles and approaches to programming. Its evolution from C gives it obvious support for a procedural systems programming style based on C idioms, but past, present and future language support opens up a wealth of other approaches and idioms, including object-oriented programming, generic programming and some elements of functional programming. This diversity is both a strength and a weakness. It can lead to code that is crisp and well matched to its problem. But it can also lead to code that is at best considered an exercise in groundless post-modernism or, less favorably, an unmaintainable and incoherent mess. This talk examines some of the styles and approaches, including their key strengths and accidental complexities, as well as consequences of and techniques for combining them. Speaker: Kevlin Henney Kevlin Henney is an independent consultant and trainer based in Bristol, UK. Kevlin’s work focuses on software architecture, programming languages and development process. He has been a columnist for various magazines and online publications, including SearchSoftwareQuality.com, The Register, C/C++ Users Journal, C++ Report, JavaSpektrum and Java Report. With Frank Buschmann and Doug Schmidt, he is coauthor of two volumes in the Pattern-Oriented Software Architecture series: A Pattern Language for Distributed Computing and On Patterns and Pattern Languages.

Part 3 – www.youtube.com Make sure to Subscribe to my Channel for all my latest videos!!! support my website too by registering at thenewboston.com

Product Description
“Every C++ professional needs a copy of Effective C++. It is an absolute must-read for anyone thinking of doing serious C++ development. If you’ve never read Effective C++ and you think you know everything about C++, think again.” — Steve Schirripa, Software Engineer, Google”C++ and the C++ community have grown up in the last fifteen years, and the third edition of Effective C++ reflects this. The clear and precise style of the book is evidence of Scott’s deep insi… More >>

Effective C++: 55 Specific Ways to Improve Your Programs and Designs


Part 2 – www.youtube.com Make sure to Subscribe to my Channel for all my latest videos!!! support my website too by registering at www.thenewboston.com

WEBSITE HAS CHANGED!!!!!**reconnetworks.net now** giving a breif introduction to basic commands and you get to make a program that takes 3 numbers that a user imputs and averages them.

I’m doing my computer engineering studies in India. We aren’t taught C in extreme detail in our university. Is it crucial or will it make things easier for me in the future if I make sure I get a high level training in C at this initial stage?

I am graduate student in chemistry but want to change career to computer field. I am planning to learn languages such as C, C++, Perl and I am so good in learning computer technologies and pretty fast in that. Can anyone suggest me how to go ahead and what kind of jobs will I get once I know them?

is there a less complicated c++ compiler than microsoft express 2008? i found it to complicated and hav found no other free program to make a fps. a tutorial on c++ game making and the easyier program would be appreciated. and if there r other programs then tell me (10 points)
don’t post if ur just gonna insult
ahhhhhhhh i meant microsoft visual 2008 sorry