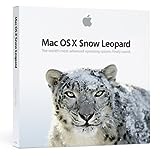 Amazon.com Product Description
Mac OS X is the world’s most advanced operating system. Built on a rock-solid UNIX foundation and designed to be simple and intuitive, it’s what makes the Mac innovative, highly secure, compatible, and easy to use. Quite simply there is nothing else like it. In ways big and small, Mac OS X Snow Leopard makes your Mac faster, more reliable, and easier …